Your soul is your immortal inner being. It existed before time began and it will always exist, even when you merge back in your ultimate spiritual home as a conscious aspect of Infinite Being – the Divine Source of all life.

Out of the 12 levels or density layers of existence, we, in this physical realm, are in 3rd density. The soul is in 5th density, and Infinite Being is beyond the 12th. Your soul is your individualized spiritual presence, operating in 5th density and it maintains communication with the souls of everyone with whom you interact in daily life. 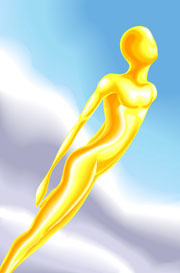 The soul world of 5th density is non-physical, our dense physical world is in 3rd density, while 4th density – the afterlife or spirit world – is quasi-physical. The term quasi-physical means that the spirit world is solid to its residents, even though they are etheric or ghost-like when compared to our dense physical structures. Spirits can, and do, bump into each other in the spirit realms because they are solid relative to each other.

Life in the spirit world is much like life in our dense physical world, except that there are certain freedoms that come with having a less dense body. The ability to levitate is one such freedom and, better still, spirits can project themselves almost instantly to another location and suddenly appear there. It just takes mental focus and – whoosh – they appear at the target location.

You don’t see people wearing spectacles in the spirit world because their sense of sight works as a direct perception rather than through their eyes in the way that we use our eyes. They can focus telescopically on distant objects to make them appear near, and they can focus microscopically on a nearby object, right down to its atomic structure. Their sense of hearing, too, can be focused to pick up sounds at great distances.

When we in the physical world are able to replicate the principles behind ‘astral projection’, we, too, will have instant transportation to other locations. Then, it’ll be bye-bye to cars, trucks, trains, planes and rocket ships.

5th density is the start of non-physical existence, so your soul is a non-physical sphere of consciousness. It has the freedom to relocate both in time and space but it spends most of its time catering to the needs of its physical, incarnate self.

In 5th density, when one soul meets another they recognize each other, not from any physical appearance, but from their unique signature vibration. Each soul emits a unique signature tone which is a form of mental energy that is perceived as a subtle sound.

Your soul is the recorder and cataloger of all of your experiences as you add your contribution to the vast array of human experience on earth. A major portion of your soul consciousness lives right here in 3rd density with you, tending to your every spiritual need. As your inner self, your soul knows you better than anyone else in the world does, and it’s available for consultation 24/7. The limiting factor is how much your physical mind will allow and accept intuitive, soul-originated thoughts.

In order to live a life inspired by intuitive, inner wisdom you need only make a decision to do just that. Open up your awareness to the whisperings of your intuitive nature. Practice following your innermost hunches. Make a note of them so that you can look back later and see how accurate they have become.

Don’t be deterred if your hunches seem inaccurate during your early attempts. It happens that way to most people. Just keep practicing and very soon your hunches will start turning into a resource so valuable that you’ll wonder what you did without it.

Owen Waters is the author of Higher Consciousness: Finding Peace and Joy Above the Noise.