Old ideas give way to new ones. Old barriers, sooner or later, crumble and fade away. 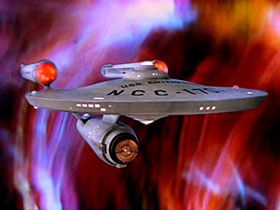 In the early Star Trek series on television, the mission of the Starship Enterprise was to explore the universe and boldly go where no one has gone before. The Enterprise was able to exceed light speed; quite considerably, it would seem, as it was supposed to have traveled to the edge of the Milky Way galaxy in just a few hours. The cruising speed actually required for such a fast journey is millions of times lightspeed.

Science fiction is often a medium for possibility thinking. The possibility of humans touring the galaxy and beyond seems eminently reasonable. After all, human potential is, by design, unlimited. There is no way in creation that the universe can be just a set of pretty lights that we never get to explore!

Today, the shift towards recognizing thoughtspeed is just beginning. Faster-than-light phenomena are being observed by today’s physicists when they see the effects of subatomic particles communicating with each other. When a subatomic particle bumps into another one, they become ‘friends’ and carry on communicating with each other. The fact that they then become separated by millions of miles does not reduce their willingness to communicate. When something happens to one particle, it lets the other particle know about it and, in pure empathy, it reacts in a like manner.

We know from the work of insightful pioneers like biologist Rupert Sheldrake that telepathy works, but how fast does it work? As thoughts are nonphysical, they certainly are not limited by lightspeed. The question is, how much faster than light is the speed of thought in free space? It is likely thousands of times, and possibly millions of times, faster.

In 2013, scientists used the latest in high-speed measuring devices to gain an idea of how fast energy particles communicate with each other across a 15 km (9 mile) distance. The equipment is still not sophisticated enough to produce a definite figure, but they did determine that the speed of particle communication is at least 10,000 times faster than the speed of light.

What’s next? Send particles over really long distances… like to the Moon? Then, when an earthbound particle reacts at thoughtspeed to its friend’s change of state as it reaches the Moon, you’d have a much better idea of the true speed of thought in free space.

In the 1940s, aircraft were limited to the speed of sound until they found a way through the sound barrier and were then able to travel at supersonic speeds. One day, when our spaceship propulsion drives are capable of accelerating ships to lightspeed, we will find a way for them to break the light barrier.

Then, we won’t be just looking up at the night sky any more. We’ll be flying through it, going where no one has gone before.

*Owen Waters is the author of Freedom of the Spirit: Four Powerful Steps to Spiritual Freedom.