With spiritual faith, your heart and mind open up and guide you in your search for personal truth. Faith in the spirituality of life is what makes your spiritual path possible. 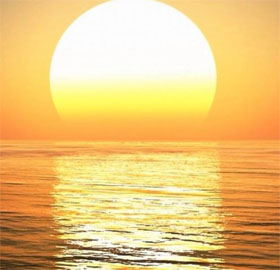 Faith may sound like a form of belief, but belief is actually a fixation upon a version of the truth. When a belief becomes rigid, seeking and growth are not possible. For example, the biggest challenge facing quantum physics today is the enormous shift that is required from previous beliefs about the nature of reality. Researchers have to shift to a new view where time, space and physicality are liberated from the constraints which people previously believed that they had.

If you believe that you exist in a fixed location in space and that time must always pass you by like clockwork, think again. Subatomic particles do not share your beliefs about time and space. They take a much more liberated view. Subatomic particles pop in and out of physical manifestation millions of times per second, just when and where they feel like it. Their disregard for time is perplexing, to say the least, as they respond immediately to events in their future and even time travel backwards to alter their past when it suits them.

Now, we can all identify with the idea of creating a different future based on decisions that we make now, but creating a different past? Well, that’s what subatomic particles do, right there in the lab. As a result, in the mathematics of quantum physics today, one of the necessary tools is negative time – the ability of a particle to send a message into its past in order to change its own history.

Subatomic particles are friendly by nature. When they bump into another particle that they take a liking to, and they seem to like all of them, they become friends and carry on communicating with each other, for ever. The fact that they may become separated by millions of miles does not reduce their willingness to communicate.

Subatomic particles, by their very freedom, serve to remind us of our true potential as conscious beings in a conscious universe. We are limited only by our personal collection of beliefs, our belief system. We also share our part of a larger, societal belief system, the consensus reality.

Faith in the spirituality of life is what makes your spiritual path possible.

With spiritual faith – an open heart and an open mind – we can discover more about today’s New Reality and what it means to humanity. Discovering more about life expands our view of reality and evolves our belief systems.

Besides, and this is what really counts, it’s fun!

*Owen Waters is author of Higher Consciousness: Finding Peace and Joy Above the Noise, available now at